In Lighthouse City Nantes, preparatory actions to integrate electrical buses (“E-Busways”) in the public transport network are in progress. The aim is to acquire 20 busways that are 100 % electric in order to respond to the high frequency of passengers and tackle climate change at the same time. Nantes will be the first city in Europe to use such E-Busways by 2018. The Swiss constructor HESS has been selected to build them.

In 2006, Nantes introduced the Busway line 4, a bus rapid transit line which connects Place Foch with Porte de Vertou. Due to its great success with 40,000 journeys per day, it was necessary to increase its capacity, comfort and performance. Hence, the city of Nantes decided in 2015 to acquire 20 Busways that are 100% electric, so called E-Busways. This choice of electric vehicles responds to the city’s ambition to tackle climate change. The Swiss constructor HESS has been selected to build these bi-articulated E-Busways which are characterised by:

·         A higher comfort with regard to access, free moving space inside and ergonomics with its 150 places

·         A higher performance with less noise annoyance for passengers and residents, zero greenhouse gas emissions and low energy costs thanks to its 100 % electric technology

The buses will be equipped with rechargeable batteries that are refilled at the fast-charging stations of ABB along the Busway line assuring an unlimited autonomy. Thus, the E-Busway offers an efficient, ecofriendly and innovative mobility system for the public transport network.

The first E-Busway will be delivered at the beginning of 2018 for testing so that Nantes will become the first city in Europe to use them. This will also be the occasion for Nantes to adapt certain infrastructures. Thus, a new technical control centre will be created in Vertou and the extension of line 4 beyond the city boundary will be examined. The official launch of the E-Busway line will be in September 2019. 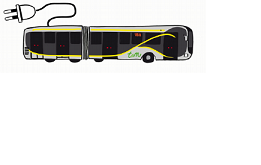